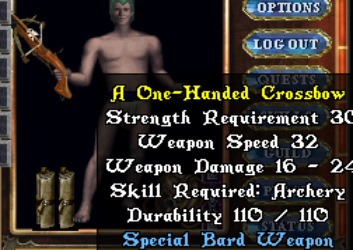 1. Earth Book, Codex Damnorum can no longer be used.
2. Bards can now use only Spellbook and Songbook.
3. Bards will have a unique weapon – One-Handed Crossbow.
4. Depending on the cast, Bard’s songbook requires either mana or stamina. 5. NPC Bards offer items off which Songwriting can be used in Bard Book.
6. Writing scrolls to train magic and copying Songbook are available only to Mages.
7. Damage in PvE and PvP is slightly increased.
8. The effect of using the Musicianship skill will be visible.
Bard’s bonus: mana restored and stamina lowered. Bonus for the ones nearby: mana restored (only works if someone’s present nearby).

1. Leech cast turns Mage into undead: Holy Magic, Heal, and Resurrect inflicts damage to a Mage.
2. Breastplate of Xenon is no longer available to Mages.
3. Mages have a new book – Holy Book. Everyone who has magery as a class skill may now use it (e.g., Hunter and PP). Bard doesn’t have such an opportunity.
4. Mages can write scrolls with Songbook and HolyBook.
5. The Reveal spell can now help detect one with a chance influenced by magery within 2 tiles from a character casting this spell (Blackrock protection won’t help there).
6. Can now wear clothes with armor (steel clothes).
7. Mass Dispel is used only on yourself and affects all around you.
8. You can now choose the target while casting Earth Quake.
9. Total buff is decreased.
10. Secret of Holy is Mage’s new GM artifact (lowers the opponent’s Holy resistance to 3 when equipped)
11. God Blessed Sorcerer Book is a new GM artifact. Gives full bless effect to the surrounding characters (Cunning, Strength, Bless, Protection, Agility, Transmutation)
12. Random transformation during Polymorph spell (depends on Magery skill)
13. Damage from Magery in PvP is decreased.

1. Daggers with the range of hit are added to the game as a chance of a drop (can be modified as well as any other weapon). Throwing Daggers have a max range of 7 tiles
2. The opponents have no protection from 7 lvl poison.
3. Damage in PvE and PvP is increased.

1. Point black shots now cause smaller damage.
2. Cooking recipes changed: four kinds of food (Lemon-Herb Fish, Pancakes, Mincemeat Pie, Chicken Potpie) now have beneficial effects such as +10 to Str. Int, Dex, Bless. Baker has them in the Cook Book available for sale.
3. Magic Fish has a bigger bonus effect among Rangers (Heal Fish).
4. SOS bottle has lower chances to be caught with fishing rod, higher chances to catch SOS bottles with nets, SOS bottle treasure hunts restored (the chest appears on a ship).
5. Lots of fish with new graphics. When cut, fish has the same results as the ordinary fish for now.

1. Plenty of new decorations added to the skill of Interior decoration.
2. All the new items, weapons, and clothes are added to the Crafting skill.
3. Magic fabric has more different kinds.
4. Previously Salvage command would disassemble everything the mouse cursor is on. Now each item requires a specific object. For example, for Wood, you need a work desk Woodworkertable which can be created with the Carpentry skill. Then you need Chisel. Use it on a crossbow and the table, and you’ll get boards back.
Fabric: Select Sewing Scissors created with Tinkering skill. Then use them on a leather item and click on the table.
5. Tinker’s Tools design has changed.
6. There are new menus for each group of crafting items.

1. A new accessory Talisman. You can wear it instead of a boa or a mask. It can give you Magic protection just like all the rest of the jewelry.
2. Buffclon is added to the game. Some beneficial effects (casts) are depicted (blue dot in the Character Status).
3. There are some new ridable animals.
4. New kinds of weapons, armor, and clothes are added to the game.
5. Magic monsters have new magic skills that damage the area, teleport, and inflict more damage during combat.
6. New looted items:
– Statuettes of ridable animals (a dumb animal will be summoned when used. No one would want to kill it and it won’t listen to your commands, but at least you could ride it 🙂
– New items and weapons.
7. New graphics for buildings, items, stones, scrolls, and gold.
8. There is a new NPC – Tutorialseller that sells absolutely all skills.
Additionally, to this NPS there is Jewelry for a more pleasant game start (Jewelry that increases each kind of protection. Each protection is +4 total).
9. LifeStream enhancement is restored in 60 seconds (no matter who used it, you or your ally).
10. Previously RuneBook had 16 charges and now it has 32.
11. Training skills higher than 150 is now available for ZuluCoins only.
12. Enhancement system is changed: One Armor upgrade (+1 charge + 1 Damage Reflection, +2 charges + 1 Dodge, + 3 charge +1 Damage Absorb). The maximum upgrade is +3 (the arrangement is approximate and the effects are random).
13. Timing for Food is 3 sec.
14. Hunger is back in the game.
15. NPC Premium Blesser casts only those who have Premium Account.
16. Weapon of Elemental Fury has the 5th attack element – Holy (previously it hit with only 4 elements).
17. Holy Elemental Shrine Lord is added, who gets the pentagram.
18. New kind of pentagram – Holy.
The Elemental gives a reward (heavy armor, leather armor, and a shield that allows casting spells).
19. Element Holy Protection is added and can be looted.
20. A huge number of shooting weapons is added to loot, just what you’ve been asking for.
21. A gun that’s made of ore can be crafted or looted now.
22. New GM items are added to loot:
– God Blessed Sorcerer Book casts the surrounding characters when used.
– Dark Lance throws one off the ridable animal. Monsters have it, can’t be dropped to players.
– Piona’s Walking Stick in hands of a Bard sics all the surrounding mobs to a specific aim.
23. Monster Mages. When magic is used inflicts that much damage as if your protection was 3.5 (if you have it higher than that).
24. Higher mobs (Balron, Behemoth, Goldendragon etc.) became smarter and stronger.

1. Grand Feast – creates food. Has a bigger effect than Create Food.
2. Angelic aura – mass heal.
3. Remove curse – takes a cursed item off the character.
4. Wrath of god – point magic. Inflicts huge damage with Holy. It works that way: if a caster’s karma is bigger than the target’s, then damages it. If a caster’s karma is less than the target’s, then it reflects back.
5. Divine Fury – point magic. Inflicts damage with Holy.
6. Astral storm – if the target doesn’t have Holy protection, then it inflicts damage within 4 sec. If there is no Free Action, it paralyzes (can’t be shaken off).
7. Summon Guardians – summons black wisp or frost wisp for help.
8. Apocalypse – creates an enormous explosion to all within its range (the effect caused with spells is tripled).

1. Song of Musical Shield – a temporary magical shield that decreases the damage you get.
2. Song of Regeneration – restores the nearby allies’ HP (ticking restoring).
3. Song of Protection – temporary increases the physical protection to the allies around you.
4. Song of Calm – mass paralysis (necro).
5. Song of Submission – mass throw-off of a ridable animal (Necro protection is required to ignore this spell).
6. Song of Weakness – a temporary decrease of the damage received from the opponents.
7. Song of Curato Musica – mass restoring of your stamina and your allies’.
8. Song of Mentis Musica – mass restoring of your mana and your allies’ (used at the spot).
9. Song of Divina Musica – mass regeneration to your allies (Mana, HP, Stamina).
10. Song of Haste – allies dexterity spell (not as strong as Mage’s).
11. Song of Defence – a defensive spell for allies (not as strong as Mage’s).
12. Song of Glory – a cast to increase all features (bless). Not as strong as Mage’s.
13. Song of Cloaking – mass invisibility spell for allies.
14. Song of Life – mass healing of allies.
15. Song of Earth – mass Earth spell.
16. Song of Air – mass Air spell.
17. Song of Fire – mass Fire spell.
18. Song of Water – mass Water spell.
19. Song of Fright – mass Holy spell.
20. Song of Salvation – mass resurrection (both for allies and enemies).